‘I feel the need, the need for speed!’ These were the words chanted by the children at Sam’s 5th birthday party as they weaved their way through our Top Gun Fighter Pilots training camp (or in other words, our popular Busyballers obstacle course). 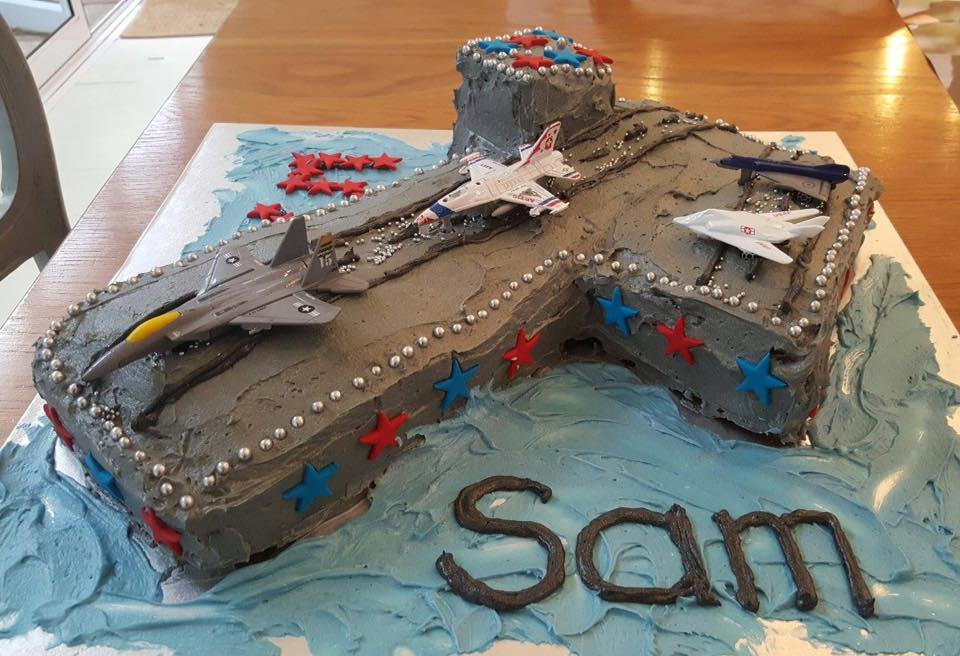 When I first heard about the theme for Sam’s party I panicked a little. Sam was turning 5 and I wasn’t quite sure whether he knew who Maverick or Goose were – its 2017 after all – however after some thought and a bit of research the ideas for games started rolling in.

For anyone else planning a party with a theme like Top Gun or Planes or anything aircraft related, here are some ideas to help you along the way:

Using various equipment such as beacons, hoops, balancing beams and hurdles we created the perfect fighter pilot training course to get the children warmed up for the games that lay ahead. If you do not have access to equipment such as this then use what you have around the house to get children crawling, hopping and skipping through the course. 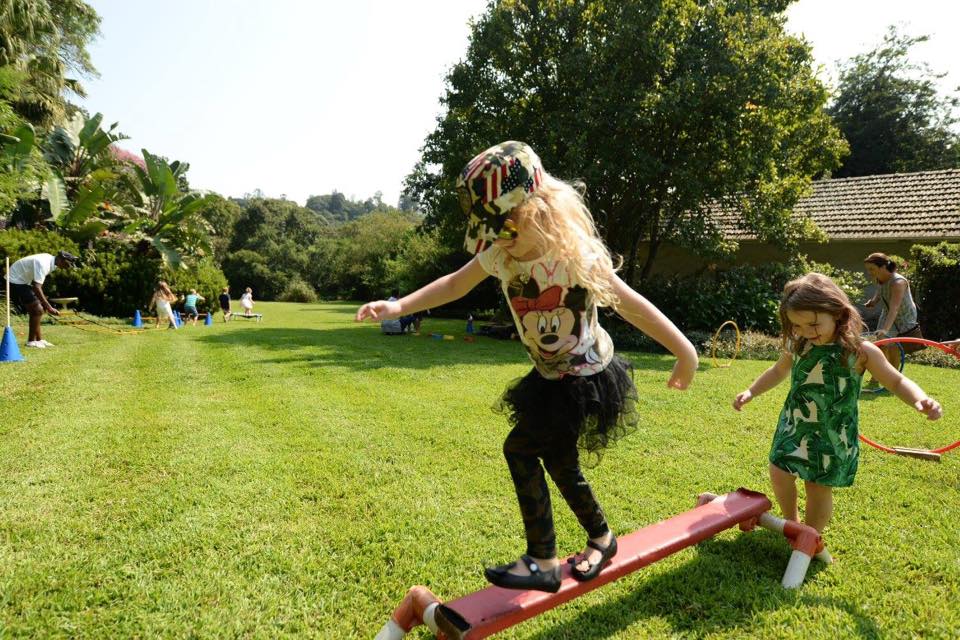 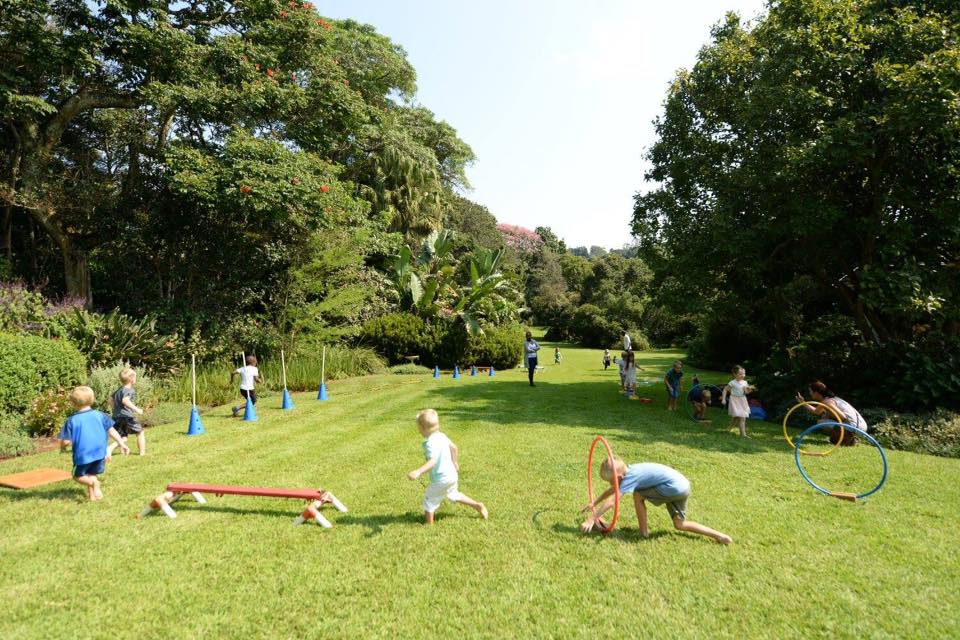 For older children that know the difference between left and right – here is another idea for a game involving an obstacle course which can easily be created at home…
Create a runway using masking tape, chalk, cones, etc to mark the boundaries of the runway. Allow enough room for the pilots to manoeuvre themselves through the course. Disperse non-breakable items, like sports balls, inflatable objects, empty bottles, clothing, shoes, toys, blankets, etc. all over the runway – these items represent other airplanes on the runway. Put the children into pairs – one pilot and one traffic controller in each pair. The air traffic controller needs to guide the (blindfolded) pilot down the runway without crashing into any other airplanes. The air traffic controller cannot touch the pilot and guides him or her only by speaking. To start this airplane party game, the first blindfolded pilot stands at the beginning of the runway with his or her arms stretched out like a plane. The air traffic controller can stand anywhere he or she chooses (it’s best if they stand right behind the pilot – this eliminates confusion with right and left commands. The air traffic controller guides the pilot down the runway and uses commands like “One step to the right”, “Two steps forward”, “Three small steps to the left”, etc. If the pilot bumps into anything (crashes), the next team takes their turn. The team that gets the furthest is the winning team.

Create a square area using cones or danger tape and let all the fighter jets (children) fly around like planes within the danger zone. The coach (or a parent) needs to stand on the outside of the danger zone and using soft soccer balls, pretends to shoot the fighter planes out of the sky. If a plane (child) is hit they need to sit out and help the coach retrieve the balls. They can also help the coach spot who is out. Try and get the children out quickly so that those who are out do not have to wait too long for another turn. Play the game a couple of times (children will keep asking for more!) and try to choose different winners each time. For older children, let them have turns to shoot the planes out the sky themselves – they will love the challenge.

For this plane party game hang different size hula hoops in the air and have the kids throw their planes (either paper planes, or plastic planes… whatever you have) through the hoops. If you can’t hang the hoops, place them on the ground and have the kids land the planes in the hoops.

For this game, we decided to use planes made out of polystyrene – very cheap and worked like magic. The kids LOVED trying to get their airplanes through the tunnels and into the net (the aircraft carrier). 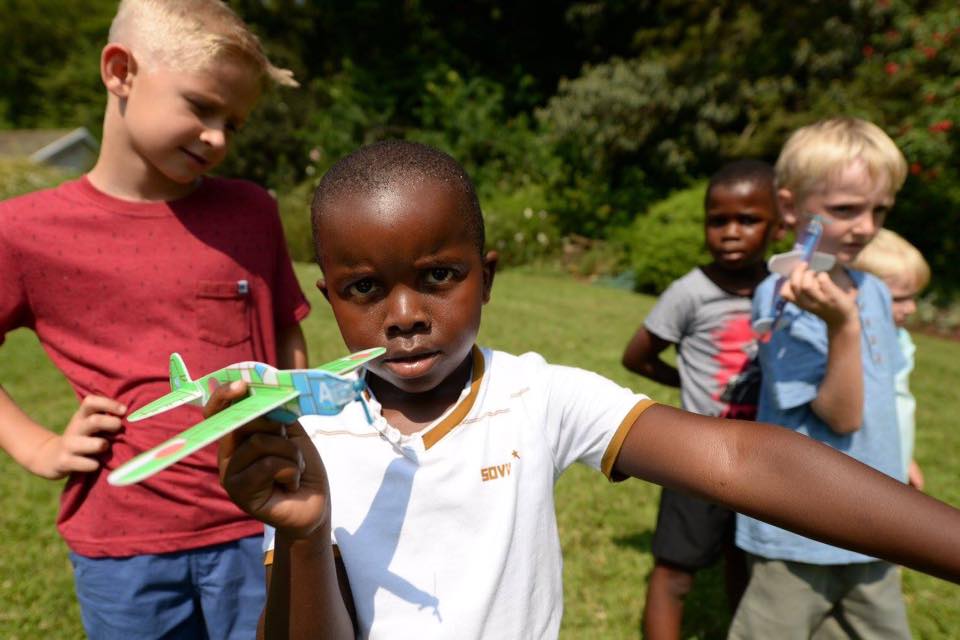 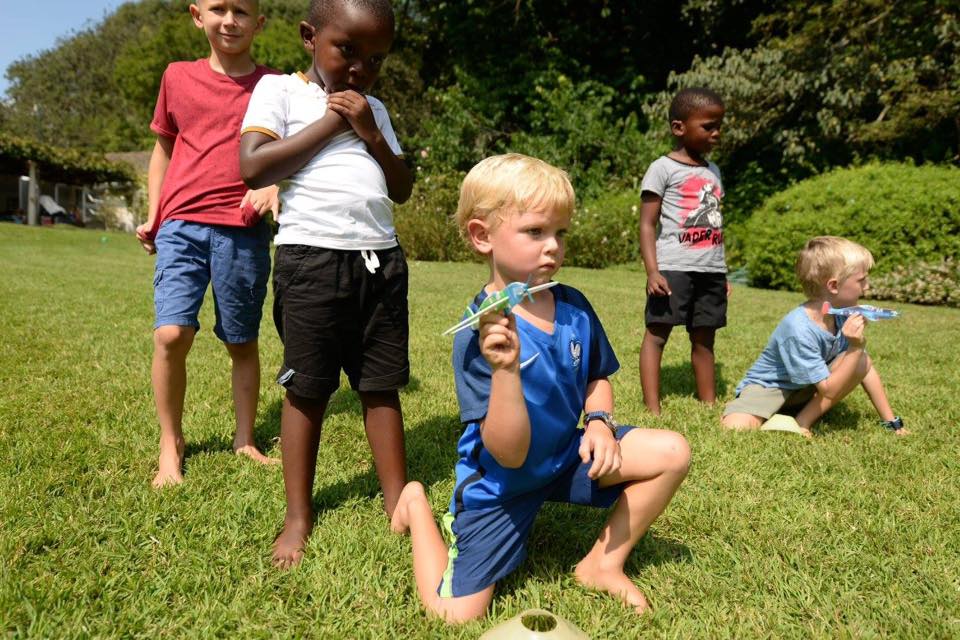 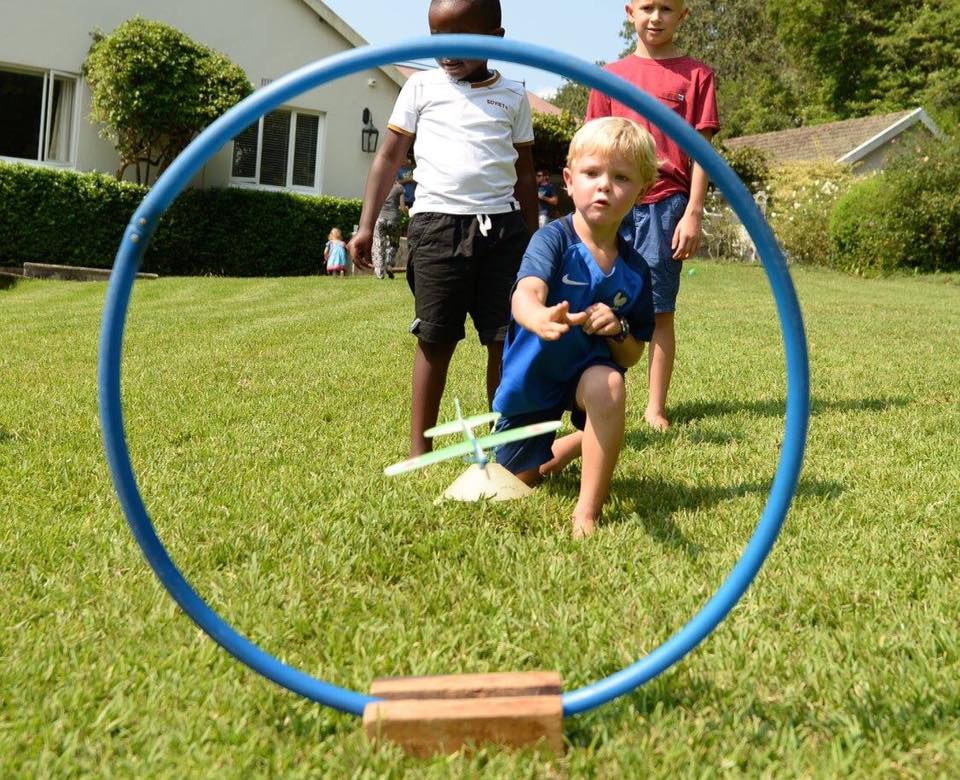 Place hoola hoops in a circle so that the children have enough room to ‘fly’ around them (you need to place one less cloud than the amount of kids there are). Children need to stand on the outside of the clouds and on the coaches (parents) instruction let the children fly around the clouds. If you have music from Top Gun or Jay Jay the Jet Plane then even better) As soon as the coach (parent) blows his whistle or the music stops, the children have to sit on one of the clouds. Whoever isn’t sitting on a cloud is out. Then remove a cloud and continue the game until one child remains and ends up as the winner. Instead of clouds, you can tape airplanes to the floor and have this airplane party game be “Musical Planes”. 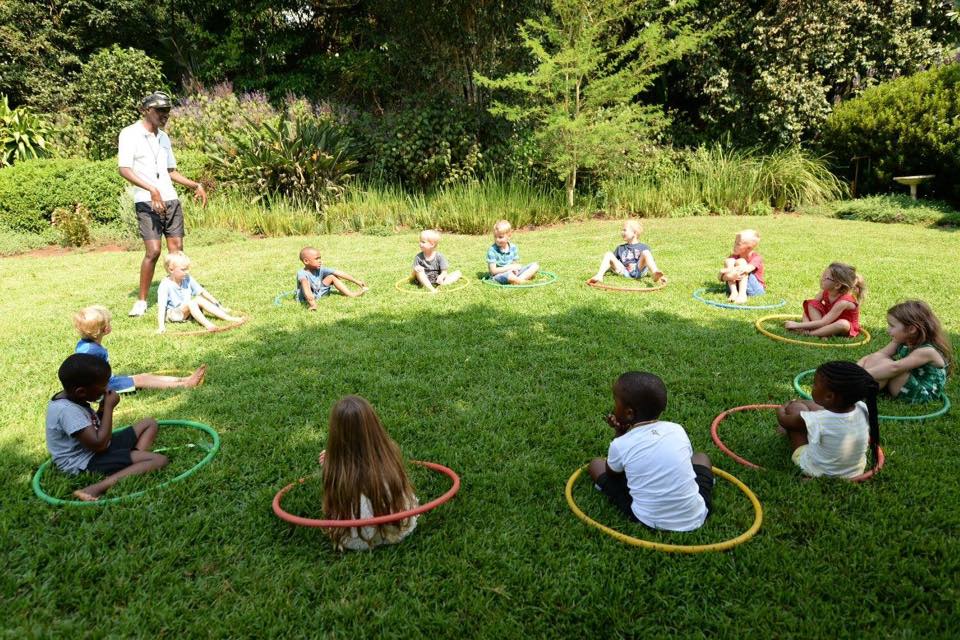 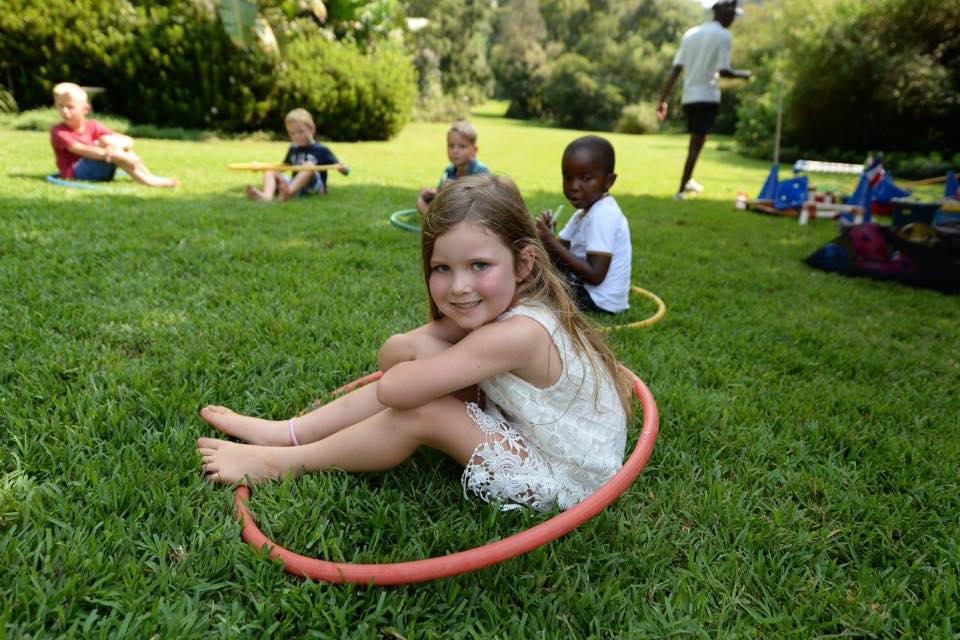 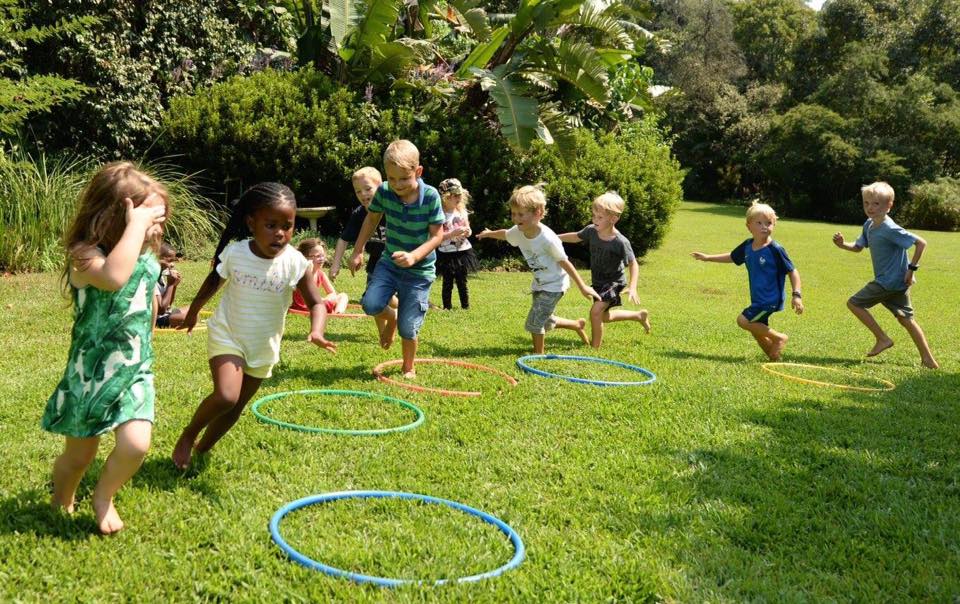 This classic game may be more suitable for the young ones (the original game is “Duck, Duck, Goose”). The kids form a small circle and all sit down. One person is it and walks around the outside of the circle, touching the other children’s heads saying “pilot”, “pilot”, “pilot”, until he comes to the person he wants to be chased by, which he calls “PLANE”. The child that gets tapped on the head when the word ‘PLANE’ is said has to hop up and chase the other child around the circle before that child takes over his sitting spot. The chaser then becomes it and the game continues until every child has had a turn to be ‘it’. 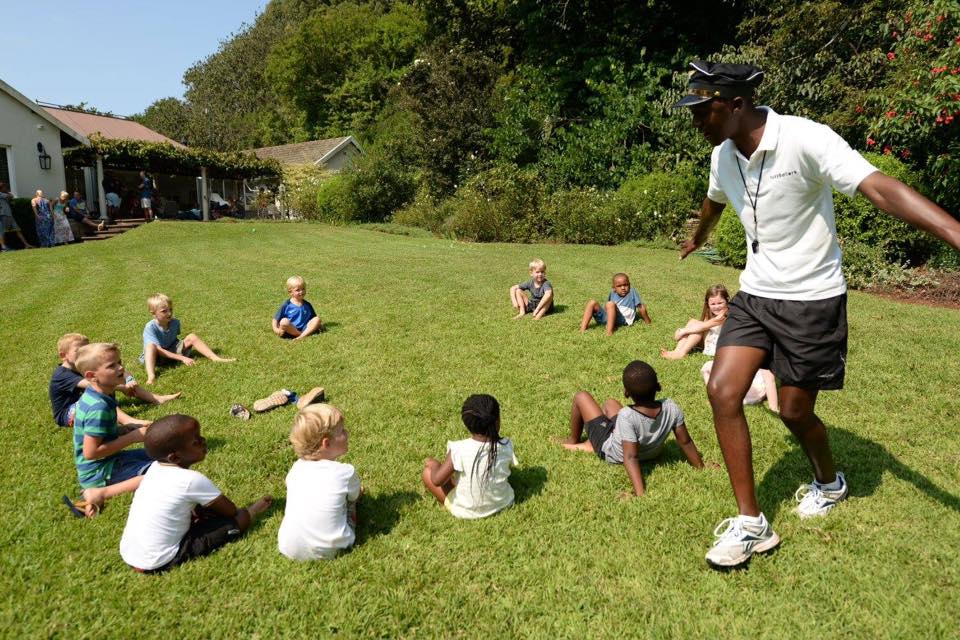 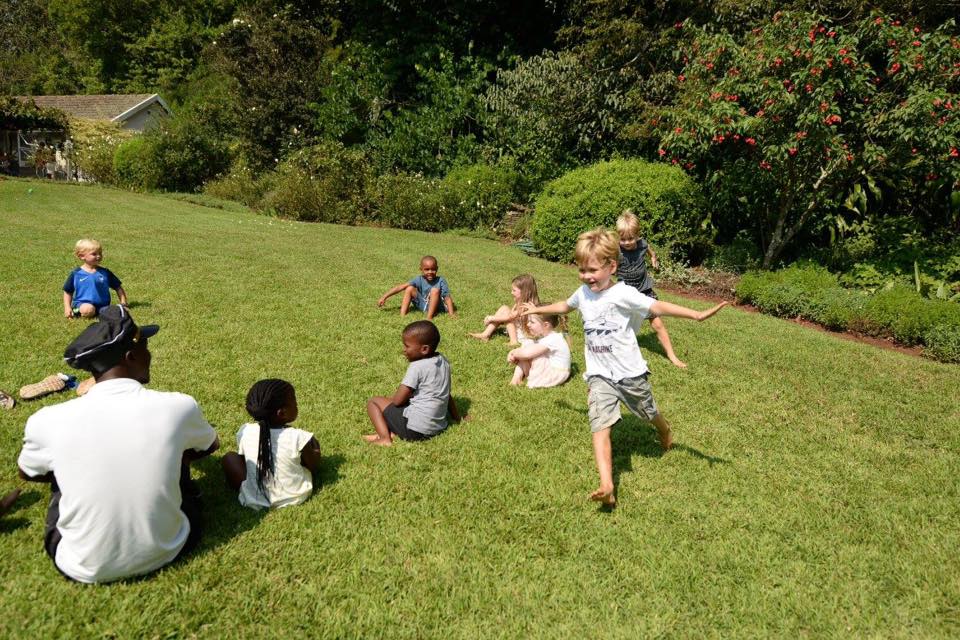 Any team games played could have the team names mentioned above in order to fit in with the theme. Any Races or Tug of War type games would work well…

For the purpose of a team game we divided the children into two teams – Team Maverick and Team Goose. The coach pretended that his tennis balls were missiles and when the coach called out a name from each team, the children had to race out and catch as many missiles as possible to take back to their air force base. The team with the most missiles in their airforce base at the end is the winning team.

NOTE: If there are lots of children at the party – add in more teams as it is best that children are kept busy and don’t have to wait too long for their turn. 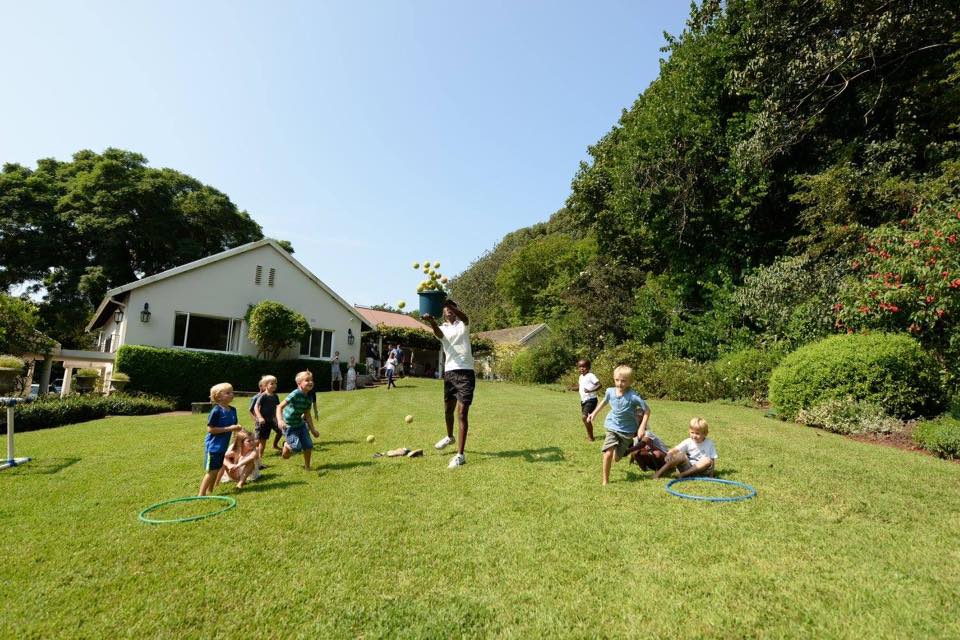 That was all we had time for at the party this time! Hope you enjoyed hearing our Plane Themed Party Game Ideas.

Got a burning question about one of our services? Click here, drop us a line and we’ll give it our best shot!

Ready to register for a Busyballers class? Click here and complete our registration form.

Ready to register for a Busyballers holiday clinic? Click here and complete our registration form.